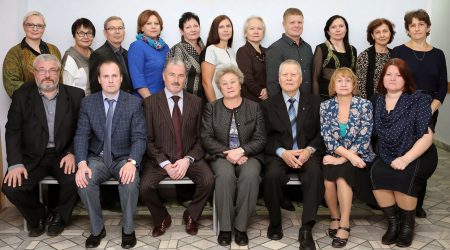 Department takes an active part in the implementation of training programs for law enforcement agencies in France, the Netherlands and the USA (the European court of Justice, the Council of Europe, the international Hague Court, U.S. state department, etc.).

The head of the department is Lidiya Izhnina, Candidate of Juridical Sciences, Associate Professor, award winner of “Lawyer of the Year” in the nomination “Legal education and upbringing”, Honorary Worker of higher professional education of the Russian Federation.

The Department conducts research work: teachers participate in international, all-Russian, regional scientific conferences; in the preparation and publication of Comments to the Criminal Code of Russian Federation and scientific publications in different publication sources.

Each member of the department works under certain scientific direction and has its own scientific interests.

One of the most important scientific directions of the department is the protection of rights and legitimate interests of citizens in criminal law and procedure at the present stage in Russian Federation. On this subject focus P. Marfitsin, A. Agutin, G. Petrova, I. Tarasov.

Works of Galina Petrova (Doctor of Juridical Sciences, Professor, Honored Lawyer of the Russian Federation) are devoted to problems of Criminal law, concept and means of the criminal law regulation.

Other important scientific direction of the department is the protection of citizens’ rights in criminal law and procedure at the present stage in European countries. At this subject are working S. Tikhonova and L. Obidina.

The sphere of scientific interests of Ludmila Obidina (Candidate of Juridical Sciences, Associate Professor) includes problems of ensuring the rights and legitimate interests of criminal process participants on the side of defense (suspect, accused, including minors); questions pf participation of council for defense, legal representative, psychologist and translator in the criminal process; problems of  establishment and development of the juvenile justice in Russian Federation; modern development of criminal procedure form (problem issues of reduced pre-trial and judicial proceedings under the current criminal procedure legislation).

Ludmila Obidina is a co-author of the project of the Union of Translators of Russia, a draft document that envisages the creation of a single information base containing information on individuals who have successfully passed a qualification examination, thereby confirming their translator skills. The register should contain up-to-date information necessary to find a specialist translator of a required qualification.

The third scientific direction of the department is study of the problems of disclosure and investigation of crimes in the light of the latest changes in criminal law and criminal procedure of the Russian Federation. V. Tolstolutskiy, S. Krepysheva and A. Rogozhkin are currently conducting a research into this subject.

Svetlana Krepysheva (Candidate of Juridical Sciences, Associate Professor) is working on the investigation of crimes in the sphere of illegal trafficking of aquatic biological resources and crimes related to human trafficking and the use of slave labor.

Aleksey Rogozhkin (Candidate of Juridical Sciences, Associate Professor) is researching principles of criminal procedure and problems related to the functioning of law-enforcement bodies.