Home page - News - The Faculty of Law Held a Round Table "Legal System, Justice and Judicial Proceedings in the United States of America: Theory and Practice"

The Faculty of Law Held a Round Table “Legal System, Justice and Judicial Proceedings in the United States of America: Theory and Practice”

The Faculty of law held a round table “Legal system, justice and judicial proceedings in the United States of America: theory and practice” on October 29 in a remote format. 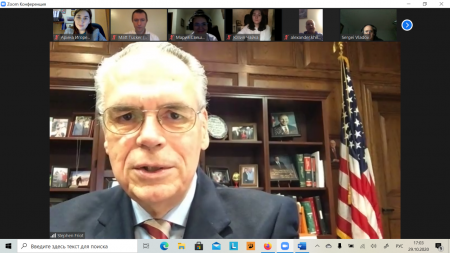 The meeting included a discussion on questions asked by students. There were discussed principles of American legal proceedings, the correlation of the principles of expediency and legality in the legal practice of the United States. Judge Friot spoke about the judicial ethics that US judges adhere to when passing sentences, and what stages the case goes through before it gets to the judge’s desk. There was also a discussion about the gender composition in American courts. Judge Friot noted that the number of women in all areas of the legal profession has been steadily increasing in recent years, with at least 27% of American judges, and this percentage is likely to grow in the future. When he was asked about the digitalization of courts and the creation of assistant programs for judges, judge Friot said that all the necessary and required software is exclusively in the minds of judges and nowhere else. Judge Friot also shared his own most interesting judicial practice, telling about acquittals issued within the framework of his office, cases involving the use of the death penalty as a punishment, etc.

“The impressions from the meeting are amazing! This interactive round table is a great opportunity to get answers to all your questions. The information was very accessible and clear. Examples from real practice were given. I saw how important it is for a novice lawyer to interact with foreign representatives of the profession. This interaction allows you not only to learn something new for yourself, but also to look at what is already “familiar” but in a different way. For example, I learned a lot about the resocialization of convicts in the United States. Judge Friot literally laid out and explained the procedure, stages of the process and a number of other features of the legal regulation of resocialization”, – reported 1st year master student Yulia Chaika. 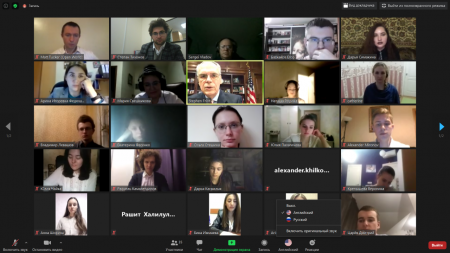