The relevance of the project can be confirmed by a number of circumstances.

The last few decades of the twentieth century and the first decades of the twenty-first century have fundamentally changed the nature of Western societies and transformed their foundations. The traditional values of the secular industrial world, which lives in the realities of scientific and rational domination, have been replaced by a new postmodern paradigm, which has many different social, cultural, economic and political connotations. Rejecting the values of modernity, postmodernism creates a need to search for new meanings, symbols and motives, attacks consumerism, focuses on the production of symbols and signs, and revives interest in spirituality and moral search.

One of the manifestations of postmodernism is a kind of “religious Renaissance”: a rise of interest in both traditional and non-traditional religions, as well as in other forms of spiritual development that are not related to religiosity. At the same time, there is a loss of confidence in traditional forms of religiosity, which is clearly observed in Western Europe and North America. Similar processes are taking place in Russian society, where the rise of interest in traditional religions (Christianity, Islam, Judaism, Buddhism) that was observed in the 80’s has completely finished. Interest in classical Orthodoxy was replaced by interest in other religious movements, including those of a destructive nature. In almost all regions of the Russian Federation the influence of Islamic fundamentalist movements is increasing with varying intensity, resulting in a weakening of the role of traditional Islam, which contributes to the formation of destructive sects that use religious themes to spread extremist and terrorist ideas.

Due to availability of information, there is an expansion of various kinds of religious teachings that find their followers (in many cases – among young people), who are usually characterized by high social activity and a low level of critical attitude to the information received. At the same time, it is extremely difficult to identify the destructive orientation of a new religious movement and to assess its ideology, goals and objectives in time. As a result, many people become victims of destructive sects, extremist and terrorist organizations.

Destructive sects, extremist and terrorist organizations are one of the serious socio-cultural threats to modern Russian society, the fight against which should include a set of various measures, including spiritual and moral education of the individual.

On the other hand, the social activity of a number of new religious movements has a positive character for society, and can be aimed at solving moral problems, growth of the individual, humanizing society as a whole, changing the attitude of man to nature, and forming eco-thinking. Representatives of new religious movements often promote selfless service to society, show an example of a healthy lifestyle, preach care for animals, and condemn alcoholism, drug addiction, moral vices and crime. Such associations help to reduce the criminal threat, improve interpersonal relationships, strengthen the family, and reduce social tension in society as a whole.

Since most representatives of new religious movements (both destructive and socially useful) take an active social position and seek to influence state policy, they become important participants in political processes and should be considered as collective subjects of socio-political social activity. Measuring the spiritual “temperature” of society, identifying the causes of destructive and socially useful forms of religiosity, determining the specifics of non-traditional religiosity as a special form of social activity and its impact on political processes in society – all these are unsolved problems of modern science.

The assessment of the impact of non-traditional forms of religiosity on society and the state, the development of mechanisms to curb their destructive impact should be the subject of a comprehensive interdisciplinary study, in which the heuristic potential of sociology, political science, law and philosophy will be realized.

As the results of the research, it is proposed to create an integral concept of the influence of social activity of various forms of non-traditional religiosity on socio-political processes. It is planned to develop criteria for attributing a particular form of religiosity to positive trends in spiritual and socio-political life that contribute to the progressive development of society and the stability of the social system; or to negative manifestations of internal orientation of the individual that pose a threat to the security of the state and have a destructive impact on society.

A special training seminar will be developed and offered for postgraduates and students studying in the specialty “Legal support of national security”, which will inform about various ways and methods of spiritual search that contribute to the development of the individual or, on the contrary, its degradation. The applied significance of the research lies in its focus on countering various socio-cultural threats and extremist manifestations through scientific understanding of the impact of non-traditional religiosity on society and the state and the possibilities of countering destructive forms of social activity of non-traditional religious movements. 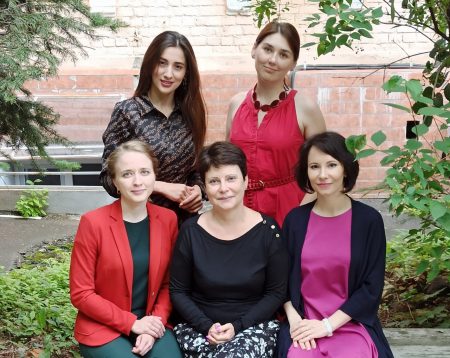